As I said in other writings and videos, no serious cryptocurrency can function in real life which is not also a truly private cryptocurrency.

By far, the most popular of all these is Monero, which has already become the de facto currency of the dark web, but also of all cryptocurrency users who actually use cryptocurrency for purposes other than a mere investment.

Monero, however, is not actually the only private or pseudo-private crypto-currency, and while I talked about its competitors in a recent stream, I think it's worth putting in words for a reference. 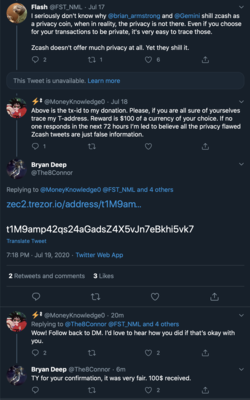 Zcash (ZEC) is often shilled as a Monero replacement. On the surface it actually sounds great and unambiguously better: it has a clever a zero-knowledge proof technology called zk-SNARKs which can store and prove transactions in the blockchain in a private way. zk-SNARKs are generally superior to Monero's somewhat ragtag triad of ring signatures + stealth addresses + ring CT to anonymize transactions and they are more scalable.

Zcash, however, has two major problems, one substantial and one accidental (in the Aristotelean sense).

The substantial problem is that zk-SNARKs are not fully trustless: they require a trusted setup where public parameters are generated and if not properly disposed of, the initial developers could use that knowledge to produce infinite money without anyone knowing. This sort of defeats the purpose of having a decentralized cryptocurrency and while the rest of the currency is decentralized, that gaping hole certainly isn't.

Zcash, while is created valuable technology, is simply not a private currency and is not a valid competitor to Monero.

Pirate Chain (ARRR) is a minor privacy coin that has mooned significantly recently popping up from 30 cents to 14 dollars or so (it's halved since I started writing this article though). Pirate Chain uses the zk-SNARK technology, but unlike Zcash, uses it mandatorily (with optional transparent transactions like Monero via the private view key).

Pirate Chain has two big issues though. The first is what I mentioned before: zk-SNARKs as they have been implemented in ZEC and ARRR are not trustless. They require a setup in which theoretically, if the public parameters of the system were known to some inside party, they could print an infinite amount of the currency with absolutely no way that any other people could know.

Even if you trust the Pirate Chain developers, Pirate has another pretty undeniable problem: 90% of ARRR has already been mined and is in circulation! Yep, you heard that right: A minor niche alt-coin which has existed for only three years was put together in such away that now as big of a proportion of it has been mined as has been mined of Bitcoin in over ten years!

That means that that 90% is highly aggregated in the wallets of the two and a half people who knew of ARRR in this period, and anyone adding to the market cap is mostly just contributing to these people's bags. Even if Pirate Chain had great trustless technology (which is doesn't) it has not been set up equitably, but in a way that enriches early adopters to an extreme degree. Expect to get dumped on if you buy this stuff.

Honestly, if you want a better, more honest cryptocurrency, you could just take the Pirate setup and give it a slower and more sane emission. That would be a better choice than ARRR itself. 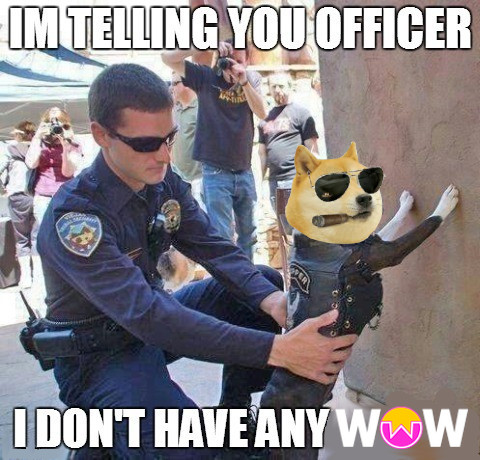 Wownero is a joke currency. It's literally a fork of Monero with Dogecoin aesthetics and some minor additions. Like Pirate Chain, it also has surged significantly recently (from 2 or 3 cents to more than a dollar—beating out Dogecoin as a pump-and-dump for sure).

Weirdly enough, Wownero is probably the best of the alternative privacy coins that I've mentioned so far. It's trustless, unlike the zk-SNARK coins, but also has some nice features.

It was created somewhat as a satirical response for another privacy 💩coin, MoneroV, which was just Monero with an initial coin offering and forked from the same blockchain (which ruins the privacy of users on both chains because it becomes easier to triangulate on when outputs are actually spent).

Since Wownero is a "joke," it actually has integrated new technology and helpful additions before Monero has, since the Wownero developers are doing it all fast and loose. Ironically, that can be good.

One principle division between Monero and Wownero is that Wownero is more like Bitcoin in that it has a totally fixed supply, while Monero has tail emission. Some people have criticized Monero for tail emission, arguing that it is unnecessary and inflationary. I am not sold on either side: the game theoretics of this has never truly played out, but Wownero might actually be something to look into if you like Monero, but think it's "inflationary." Regardless, Wownero's whitepaper and roadmap on their website are something that everyone should read and take seriously.

Again, the currency is sort of a meme, but it is what it is. I decided to start taking Wownero donations on my site a while ago, just for fun.

Suterusu and the Suter Token

Now the ideal private currency would have the simple and scalable zk-SNARK technology implemented in a fair way and hopefully started in some novel manner that is truly trustless. Suterusu is one potential candidate for this kind of system. Behind it is a novel idea of zk-conSNARKs which can be read about in their whitepaper, their yellowpaper and a document on Suterusu architecture

This technology hasn't been extensively vetted, but it has the potential to solve all the issues in privacy coins.

Suterusu isn't quite meant to be an analog of Monero. The token itself is actually just an Ethereum token. In fact, this might be the interesting part: Part of its system is that it can provide zk-conSNARK shielding to other currencies that support smart contracts. You can use Suter to transact with Ethereum privately, for example.

The Suterusu system, however is not perfect as far as I'm concerned. It isn't a self-propelling decentralized system in the way that Bitcoin or Monero is. That makes is regulatable and subject to human whim in a way a cryptocurrency should not be. It is a designed system with dev taxes and even regulatory compliance that includes blacklisting.

In addition to the zk-SNARK system used in Zcash and Pirate, there also exists zk-STARKs, which like zk-conSNARKs allow for a trustless setup. Whitepaper.

I do not know of a currency project that uses this technology now. Like zk-conSNARKs, it's only a couple years old.

Would be one that:

Monero gets only half credit on 3, but full points on the rest. Wownero is the same, although perhaps it should be taken less seriously as a Doge-tier joke. Zcash fails on 1 and 2. Pirate Chain fails on 2 and 5. Suterusu has great tech, but flounders on 4.

So the recipe for an ideal currency is here. It is one that implements the zk-conSNARK technology of Suterusu or zk-STARKs (provided that such technology is appropriately vetted), but does so in a way without centralization, dev taxes and other self-refuting silliness.

This ideal currency might just be Monero itself, to my understanding Monero has contemplated integrating zk-STARKs as they become more well-travelled. Such an addition, if it works, would drastically improve the scalability of Monero even if it might require somewhat of an overhaul.